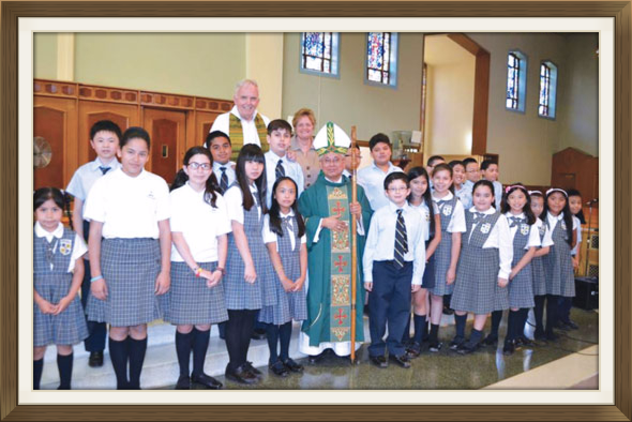 The occasion was the prelate’s June 20 visit to St. Michael’s Church, Flushing.

Auxiliary Bishop Raymond Chappetto joined the many members of the ministry to Filipino migrants in welcoming the cardinal.

To the many Filipinos scattered around the world in search of better opportunities and life to provide for their family back home, these are encouraging words to hear and reflect in front of a guest such as our Cardinal Quevedo.

To leave one’s family behind is a heartache, let alone the feeling of being alone in a place so far, so new and so overwhelming. It could only be achieved through a strong faith.

The presence of many Filipinos in the Diocese of Brooklyn is what made possible this visit by Cardinal Quevedo to the local Filipino community that is guided by Father Patrick Longalong.

And what a visit it was! The cardinal’s schedule was packed and tight! He arrived in the United States on June 16. He was the main celebrant for the celebration of the 19th Annual National Filipino Pilgrimage of the Birhen ng Antipolo (Our Lady of Peace and Good Voyage) at the Basilica of the National Shrine of the Immaculate Conception in Washington on June 18. This same image of Our Blessed Mother is the Filipino Marian image at our Co-Cathedral of St. Joseph in Brooklyn.

In Flushing, his homily reminded us of our duty and love of God. From the first reading of the story of how Israel and Judah violated God’s statutes and commandments given to them; then the Gospel message of the hypocrite’s actions of judging others before seeing one’s own faults.

He explained to us our two renewal promises during Easter; (1) that we reject Satan and renounce sin; (2) that we believe in God, Our Lord Jesus Christ, the only begotten Son, born of the Virgin Mary.

Cardinal Quevedo was also gracious to offer healing prayers to many who took turns to greet him. There were conversations and picture taking as well.

Promise, covenant and integrity were the words our cardinal left for us to reflect upon. In his humble stature, his words were spoken in a tone fitting for his demure personality.

Cardinal Quevedo, O.M.I., is the first Cardinal (cardinal-elector) from Mindanao; he was one of the 15 new cardinals named by Pope Francis on Jan. 12, 2014.

He is called by many names such as Cardinal of Peace, Cardinal for all People in Asia, the Cardinal of the People, a Prophet in Mindanao, but he refers to himself as a “servant.”

As a prophet, he has been described as someone who stands for the righteous and offers hope for the persecuted and the neglected in Mindanao, one of the poorest area in the Philippines.

In Mindanao, the war waged between the Christians and Muslims seemed an ongoing challenge to the Filipino government. And yet Cardinal Quevedo maintains that the root of insurgency in the south is injustice.

Cardinal Quevedo like Pope Francis shares the concern, understanding and desire for a simple, poor, and humble Church.